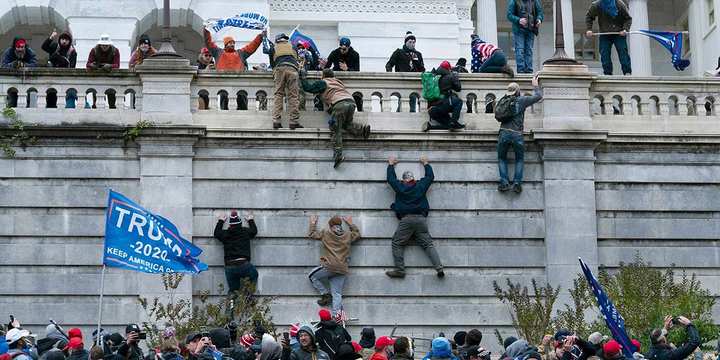 “The enemies of democracy will rejoice at these inconceivable images,” German Foreign Minister Heiko Maas tweeted on Jan. 6.

Followers of President Trump had stormed the Capitol that afternoon to stop the certification of the Electoral College ballots that elected Joe Biden. As lawmakers went into hiding, the mob roamed the marble halls, occupied the Senate chamber, and trashed offices. Live video showed a party atmosphere, with some of the insurrectionists posing for pictures in House Speaker Nancy Pelosi’s office and the seat where minutes before Vice President Mike Pence had presided over the ballot counting.

Trump incited the riot by telling his followers the election was stolen and urging them to march on the Capitol. When he finally told them to go home in a video message, he added, “We love you.” Trump showed every sign of believing his own warped narrative of mistreatment, which, scarily, means that the U.S. government is in the hands of a full-blown narcissist who can’t distinguish reality from fantasy.

As this photo essay shows, Jan. 6 was one of the most shameful days in U.S. history. The next question: When Trump self-destructs, what becomes of Trumpism? –The Editors

• At about noon, Trump took the stage at a rally of his supporters near the White House.

• At about 1 p.m., House Speaker Nancy Pelosi gavels in a joint session of Congress to certify the election of Joe Biden as president.

• By 2 p.m., crowds have massed at the West Front of the Capitol.

• At around 2:30 p.m., police inside the Capitol use tear gas to try to disperse the mob. On their side, Trump supporters set off fire extinguishers.

• About the same time, police evacuate the Senate chamber.

• In the evening, Congress resumes the certification of Biden’s election.