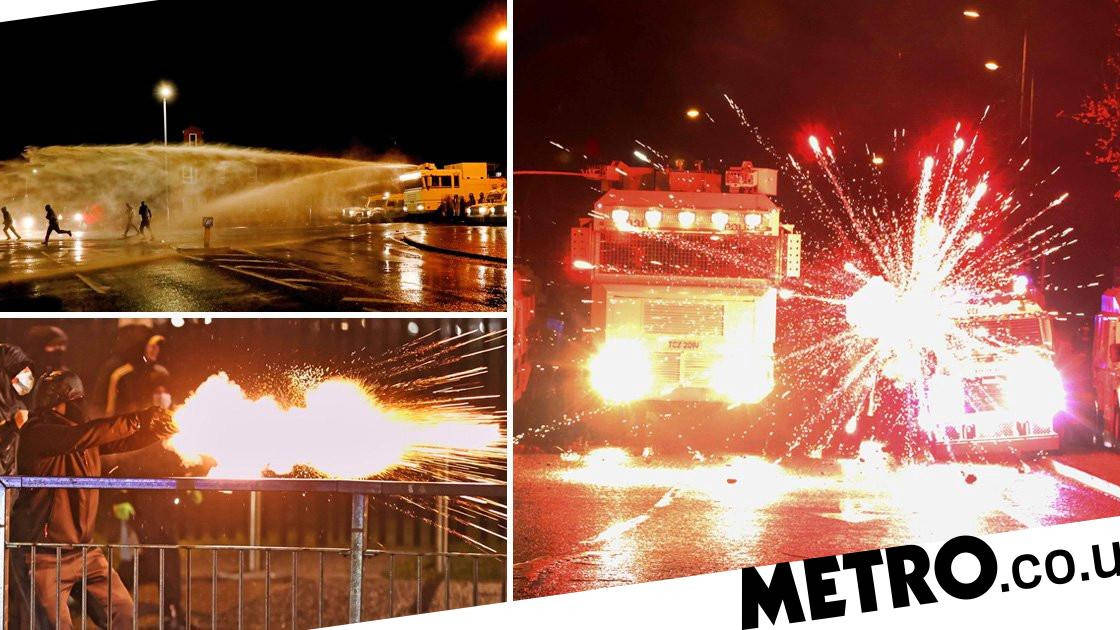 Rioters were blasted with a water cannon by police as violence erupted on the streets of Belfast for the seventh night running.

The unrest in Northern Ireland has been described as the ‘worst in years’ with petrol bombs, fireworks and rocks thrown at officers on Thursday.

Fifty-five officers have so-far been injured in a week of clashes between nationalists and pro-British loyalists at the so-called ‘peace wall’ on Springfield Road.

Those involved last night were warned by police to ‘disperse immediately or the water cannon will be used’.

However, those present continued to fire missiles and after several warnings, the water cannon was deployed.

Some of those present jeered before fleeing as the water jet came closer.

Justice Minister Naomi Long issued a fresh call for calm after what she called ‘depressing and reckless’ scenes.

She tweeted: ‘More attacks on police, this time from nationalist youths. Utterly reckless and depressing to see more violence at interface areas tonight.

‘My heart goes out to those living in the area who are living with this fear and disturbance. This needs to stop now before lives are lost.’

There were also reports that police warned crowds ‘impact rounds will be fired’. The plastic bullets are not used as a means of crowd control in any part of the UK apart from Northern Ireland, and their use has been condemned by human rights groups.

Six were fired on Wednesday, when there were clashes between both communities along the peace wall that separates the unionist Shankill Road from the nationalist Springfield Road.

But Thursday night’s unrest appeared to be confined to nationalists.

Groups of community activists were seen attempting to prevent access to the gate of the peace line where clashes took place the previous night.

PSNI officers were seen holding riot shields and being pelted with missiles before causing the youths to flee by charging at them with dogs.

Analysts have blamed the clashes on tensions over Northern Ireland’s Brexit arrangement and an illegal gathering at the funeral of IRA member Bobby Storey last summer.

Unionists are furious at a decision by prosecutors not to take action against 24 Sinn Fein politicians for attending the funeral – a decision partly related to the fact that police had engaged with organisers before the event that drew 2,000 people on to the streets.

They are also angry at post-Brexit trading arrangements that have created economic barriers between Northern Ireland and the rest of the UK.

Earlier, Boris Johnson and Irish premier issued a joint statement condemning the violence after the pair spoke over the phone about the clashes.

The Irish Government said the two leaders stressed that violence was unacceptable.

‘The way forward is through dialogue and working the institutions of the Good Friday Agreement,’ the statement said.

‘They agreed that the two governments would continue to stay in contact.’

The Biden administration in the US also appealed for calm in Northern Ireland and voiced its support for the Brexit protocol.

At a briefing on Thursday, White House press secretary Jen Psaki said: ‘We are concerned by the violence in Northern Ireland and we join the British, Irish and Northern Irish leaders in their calls for calm.

‘We remain steadfast supporters of a secure and prosperous Northern Ireland in which all communities have a voice and enjoy the gains of the hard-won peace.

‘We welcome the provisions in both the EU-UK trade cooperation agreement and the Northern Ireland Protocol, which helped protect the gains of the Belfast/Good Friday Agreement.’

Northern Ireland Secretary Brandon Lewis earlier welcomed a united message of condemnation of the violence by the Stormont parties.

He denied that the UK Government had abandoned unionists through the new Brexit arrangements.

Mr Lewis arrived in Northern Ireland on Thursday to speak to political and faith leaders, as well as the police.

He said there could be no justification for the violence.

‘I absolutely recognise the challenge and the sense of identity challenges that people in the unionist community have felt around the protocol and the practical outworkings of it,’ he said.

‘That’s why we took the actions we took just a couple of weeks ago to help businesses and consumers here in Northern Ireland.

‘Obviously, I also appreciate people have talked about the decision last week by the DPP (Director of Public Prosecutions), the situation with people coming out of Covid and as the PSNI has said today, pure criminal activity and encouraging young people to take up criminal activity.

‘All of these things come together in a way which is completely unacceptable.’

Ministers in the Stormont Executive condemned the violence and unanimously passed a motion calling for an end to the disorder.

PSNI Assistant Chief Constable Jonathan Roberts said the spate of rioting is some of the worst he’s seen in years.

Get in touch with our news team by emailing us at webnews@metro.co.uk.

For more stories like this, check our news page.